Hammertoe is a foot condition in which the toe/toes have ab abnormal bend in the middle joint.

Why are they called Hammertoes?

What a weird name: Why hammertoes?? The toe bends and apparently to someone somewhere it resembles a hammer.  It does not look like a hammer to me but somebody thought it did so the name stuck.

There are three or four names for hammertoes. There are several names for contracted toes that describe which joints are contracted.

It really does not matter that much which joint is involved; they all can cause pain and difficulty with shoe gear.

How common are Hammertoes?

Some studies estimate that hammertoes occur in 14% or people and in families with hammertoe genetic propensity is 61%.  They are also more common in females.

Genetics probably causes most hammertoes.  They can be made worse or more painful by ill fitting shoes .  Most hammertoes are also associated with some muscle imbalance with the flexor tendons over power the  extensor tendons.  Thus the toes curl down.   Many researchers  think bad shoes cause hammertoes.  There is a big difference between CAUSE AND AGGRAVATING a hammertoe. I suppose if you wore a tight shoe every day over a long period of time, and left them on at night the toes would become adapted to a hammertoe position much like Chinese foot binding. That would be a cause. But if you are barefoot or use sandals frequently then shoe likely is not the only cause of the hammertoes; they just aggravate the hammertoes. That being said, good well fitting shoes with good biomechanical control should certainly decrease the risk of getting a hammertoe. There is no long-term research on this that I could find.  However, when  appropriate support and shoe fit is applied the tendency to curl the toes decreases dramatically.

Don’t hide behind your shoes anymore!

Take the next step toward happy feet and schedule today!

Ask about our minimally invasive way we treat hammertoes! 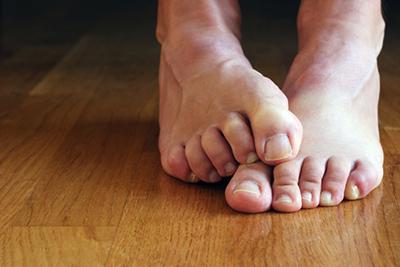 Hammertoe procedures have to be carefully planned depending on which joints are involved and how severe the deformity are at those joints. Some deformities are flexible and some are rigid. This all has to be taken into consideration when considering what procedure is best to correct the deformity.

There are many different types of splints that help keep the toes straight. There was some you wear while sleeping an others in shoes. Some are designed to take pressure off certain areas of the toes to make them more comfortable.

Some are made to try and straighten the toes. They all are somewhat useful but become tedious quickly. There is no evidence that these straighten toes but they can make the toes more comfortable. Anecdotally, these splints to help straighten out hammertoes sometimes.

Orthotics change the way your foot interacts with the ground. It can make your foot more stable so that there is less gripping of the floor which contributes to hammertoe deformity for many patients. (link to our page on Go4 D orthotics)

Diabetic shoes are a great option for people with toe deformities.  You do not have to be diabetic to use the month course.  What they do provide is a very deep toe box.  This provided significant room for toes that are crooked and takes a lot of pressure off the offending locations.  It also allows for the use of toe splints to accommodate these deformities if needed .   a few years ago most diabetic shoes were so ugly nobody would wear them.  That is not the case anymore.  Diabetic shoes now come in a lot of very attractive styles.

Some of those are used to treat hammertoes, such as:

At the Next Step Foot and Ankle Clinic 95% of our hammertoe surgeries are performed with a minimally invasive technique.  This involves the use of local anesthetic and a needle.

NO SCALPEL, NO BIG INCISION, NO LONG RECOVERY and can be performed in a few minutes, requiring only 2 days recovery.

This procedure is performed with a needle.  A dressing is applied.  The patient leaves the dressing on for 2 days. Once the patient removes the dressing they are generally able to wear regular shoes as long as they are not too tight.  They return to normal activities for the most part.  In some cases, the toes feel bruised for a few days.  No pins or hardware are needed.  Occasionally some splinting is necessary and very rarely, more traditional surgery may be necessary.  The biggest advantage of minimally invasive hammertoe surgery, besides the much shorter recovery, is that we have observed a more natural appearance of the toe after surgery.  The toe assumes its correct clinical alignment in most cases.  Your  toes just look normal.  No scar is seen.  The length of the toe remains the same.  This usually results in a very cosmetically pleasing appearance.

Get back on your feet and your shoes in just 3 DAYS!

Dr. Silvester talks about our minimally invasive way we treat hammer toes. Getting you back on your feet and in your shoes in just 3 days!

Fill out our quick Appointment Request

Take the next step
to happy feet!

Click the links to request your appointment or learn more about what Next Step Foot & Ankle Clinic can do for you.

REQUEST APPOINTMENT
EDUCATIONAL VIDEOS
NEXT STEP DR'S BLOG
Where will take you?