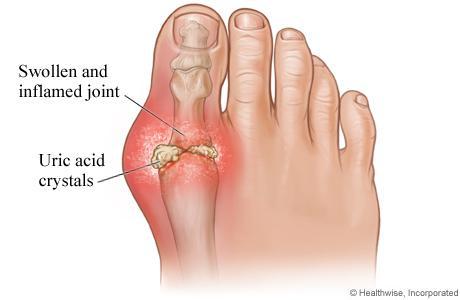 Gout is a disorder that results from the build-up of uric acid in the tissues or a joint –most often the joint of the big toe.  An attack of gout can be miserable, marked by the following symptoms:

Intense pain that comes on suddenly — often in the middle of the night or upon rising.Redness, swelling, and warmth over the joint– all of which are signs of inflammation.

Gout attacks are caused by deposits of crystallized uric acid in the joint.  Uric acid is present in the blood and eliminated in the urine, but in people who have gout, uric acid accumulates and crystallizes in the joints.  Uric acid is the result of the breakdown of purines, chemicals that are found naturally in our bodies and in food.  Some people develop gout because their kidneys have difficulty eliminating normal amounts of uric acid, while other produce too much uric acid.

Gout occurs most commonly in the big toe because uric acid is sensitive to temperature changes.  At cooler temperatures, uric acid turns into crystals. Since the toe is the part of the body that is furthest from the heart, it’s also the coolest part of the body — and, thus the most likely target of gout. However, gout can affect any joint in the body.

The tendency to accumulate uric acid is often inherited.  Other factors put a person at risk for developing gout include:  high blood pressure, diabetes, obesity, surgery, chemotherapy, stress, and certain medications and vitamins.  For example, the body’s ability to remove uric acid can be negatively affected by taking aspirin, some diuretic medications (“water pills”), and the vitamin niacin (also caled nicotinic acid).  While gout is more common in men aged 40 to 60, it can occur in younger men and also occurs in women.

Consuming foods and beverages that contain high levels of purines can trigger an attack of gout.  Some foods contain more purines than others and have been associated with an increase of uric acid, which leads to gout.  You may be able to reduce your chances of getting a gout attack by limiting or avoiding the following foods and beverages: shellfish, organ meats (kidney, liver, etc.), red wine, beer, and red meat.

In diagnosing Gout, laboratory test and x-rays are sometimes ordered to determine if the inflammation is caused by something other than gout.

Initial treatment of an attack of Gout typically includes the following:

Medications – Prescription medications or injections are used to treat the pain, swelling, and inflammation.Dietary Restrictions – Foods and beverages that are high in purines should be avoided, since purines are converted in the body to uric acid. Click here for an example of a purine controlled diet. 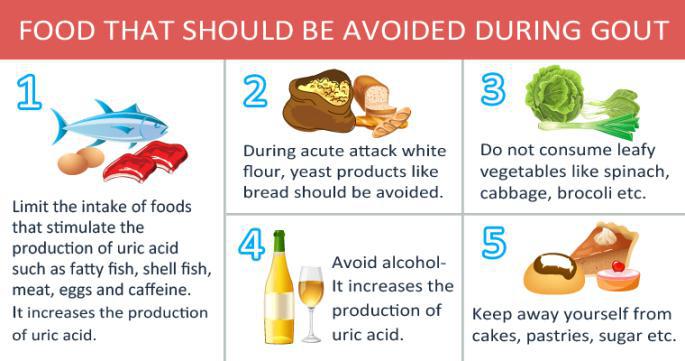 Fluids – Drink plenty of water and other fluids each day, while also avoiding alcoholic beverages, which cause dehydration.Surgery – In some cases of Gout, surgery is required to remove the uric acid crystals and repair the joint.