Arrrggh, My Bunion Came Back! The problem.

Few things are more discouraging to the patient in a foot and ankle doctor’s office than a recurrent bunion.  It is surprising how often this occurs.  This past month I re-performed bunion operations on two unfortunate patients.  Their previous bunion procedures were performed by other physicians. One patient actually stated that her deformity came back within 3 months of having the initial surgery.  On the other patient, the bunion recurred within 2 or 3 years and she originally lived with it for about 10 years prior to her first procedure.  During that time, she was unable to wear shoes comfortably.  Both of these patients invested a great deal of time and money correcting their foot deformity.  Both of them missed work during the recovery and they were very upset and discouraged about the recurrent deformity.  Often the recurrent deformity is worse or hurts worse than the original bunion. 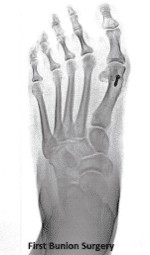 Performing a good bunion surgery and picking the right surgery requires a very careful examination prior to the procedure.  The degree of deformity, the stability of the foot, the presence of other contributing biomechanical factors, the reducibility of the deformity, and the patient goals all need to be taken into consideration to make a decision on which procedure to be performed.  Unfortunately, if any one of these is overlooked, then the deformity is much more likely to recur.  There are other factors such as poor shoe gear following the surgery, or injury following the surgery that can also contribute to a recurrent bunion deformity. 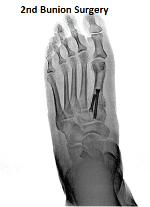 Once that procedure is decided upon then good surgical technique is critical.  If the procedure is inadequately performed, even if it is the right procedure, the correction may not last or may not be enough.  Also I think some of the fault lies with schooling.  Schools teach that a certain amount of deformity left on the surgical table is acceptable.  After performing hundreds of bunion surgeries, I tend to be much more aggressive in the correction and have found much more satisfactory results.

Can a bunion that came back be fixed so it won’t ever come back again?

The answer to that question is usually yes!!  In medicine nothing can be guaranteed 100% of the time.  However, there are procedures that can be performed for bunion deformities that have almost a ZERO recurrence rate.  Unfortunately, many physicians don’t perform these procedures so patients that need them are often not offered these procedures.  Fixing a recurrent bunion is much more difficult than correcting a “virgin” bunion.  But, there are things that can be done to solve this vexing problem.  With the right work up, a close exam and a carefully planned procedure you can have a straight toe and foot.

So give us a call if you would like a second or even third opinion on your foot deformity.  We will give you straight answers and take the time to explain your problem and what can be done to correct it.